Time has flown by so fast!

I can’t believe it’s April 2014. It’s been quite a while since I’ve posted something on my page. As I was looking through my webpage, I realized that I still had this draft to post. Initialy, it was going to recap August and September 2013 but I never got around to September. So here is the recap of August!

17th – The (I Guess You’re In This Wedding) Wedding

Before going to this wedding, I thought that I was merely going to be a stand-in for the real bridesmaids. However, once I arrived to the location, I found out that I had full bridesmaid duties…because I was the bridesmaid! This came as a huge surprise considering that I have only seen/met the bride twice before the wedding. The whole day went by in a blur – literally. The combination of the heat, the false eyelashes that cut off half of my vision and not wearing my glasses was a killer. I can only sum up my day in several snippets of events: The bride spontaneously shaved off some of my eyebrows. I looked like a clown. I had a cluster of 15-20 pins on my sleeve that were on the brink of stabbing me. I barely ate any food that day. I had a raging headache by the end of the night. I ripped off my eyelashes on the car ride home. I fell asleep on my mom on the way home. 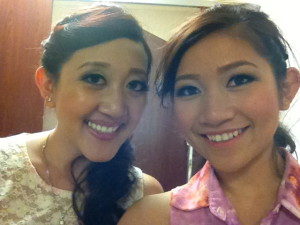 Despite all of those things that happened, I am glad that I was able to experience being a bridesmaid. I was glad to help and lend a helping hand. I am very thankful for the experience because it made me think about what I would do if I were to ever get married. Maybe it’s the people that I know or something, but I have been to my fair share of weddings to know that it is not pretty or fun for the people actually involved in the wedding. I’m hoping that my wedding will have less stress and more fun because I’d rather pay to get something done as opposed to stressing out about something or having someone else stress out for me. Why would I want to put myself or someone else through that? In my opinion, you should get married if you are in love and if you have the funds for the type of wedding that you want. Why should you spend so much if it’s a wedding that you don’t really want? It’s supposed to be a fun and happy day for you and your guests! 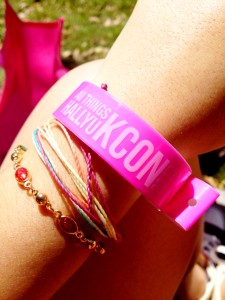 This whole experience was pretty awesome. I wasn’t sure what to expect before going to the convention. I just knew that there would be a lot of fans and a lot of k-pop playing everywhere…which came out to be true! Before going into the actual convention, the workers gave everyone scratch cards. I had no idea what it was until two girls came up to me and my sister and asked if we had two EXO cards. We were so confused but peeled off the sticker on the card anyway while the girls hovered over us. Low and behold, we both got “EXO viewing sessions”…whatever that meant. It must have been really rare because the two girls wanted to trade their miss-matched cards with me and my sister. Seeing as how I got the same card as my sister, we held on to our cards and apologized to the girls.

After that, we basically walked around and looked at everything. We relaxed when we needed to and explored when we felt like it. That’s the thing I love about going somewhere with my sister. We’re not in a rush to go somewhere (unless there’s a line forming) and we do exactly what we want to do. 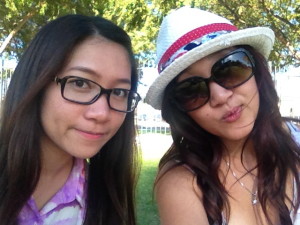 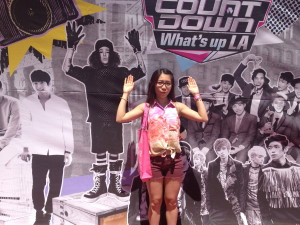 Here’s us taking some pictures while we were wandering the KCON grounds. The first one was us sitting on the grass and watching people on the stage. The second one is my failed attempt to emulate my idol G-Dragon [GD]. 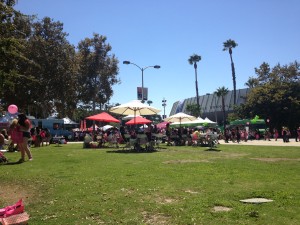 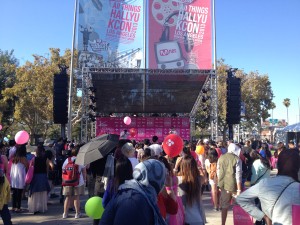 Here is what the KCON grounds looked like, for the most part. This was the field where me and my sister spent most of our time because it was spacious and right next to the stage. The second image is the stage where people performed and showed off their k-pop love. It was marvelous! 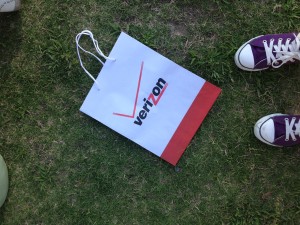 You must be wondering why there is a Verizon bag on the grass and why there’s an image of a stick-like thing in front of the sun. Let’s backtrack a bit. While walking around prior to the bag photoshoot, I thought that the Verizon booth was handing out free things. Once I arrived to the front of their booth, I realized that they were just handing out free Verizon bags. To much of my demise, I took one and dismissed myself. Let’s go back to us in the field. Turns out, there weren’t enough chairs for everyone to sit on out in the field. Thanks to my curiosity and my college student habits of obtaining free things, I used this bag as a cushion between me and the wet grass. As for the image of the stick and the sun…that stick was a palm tree. This wonderfully skinny tree surprisingly provided enough shade for me and my sister on the field. We even moved along the shade with our Verizon bag as the sun made its way down towards the horizon. How poetic :)

I must admit that the second day was way more exciting than the first day. I mean, it was the day where I would see EXO up close and when the concert would take place. Now that my sister and I knew what to expect, we carried on our day as we planned. First order of business? We would get our stupid food voucher to purchase a smoothie thing. 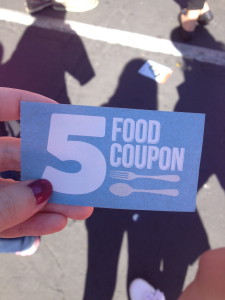 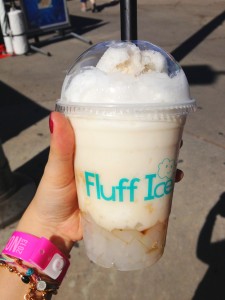 Now, why did I call that $5 coupon/voucher stupid? It’s stupid because it forced everyone to use these vouchers instead of using cash or card. Yeah, it’s great for the vendors because it simplifies everything. However…and this is a very big however, it resulted in everyone being forced to pay more for very little food. Everyone at the convention was very displeased with this method of purchasing food on the first day. Thus, we were smarter on the second day and brought our own food. We just really wanted to try this Fluff Ice thing because it offered blue boba. Turns out, it wasn’t as great as I thought because they ran out of blue boba on both days. *note: I forgot. We actually got that Fluff thing on the 1st day but on the 2nd day, we gave up because they had no blue boba on either days.

After being disappointed with the boba drink, we went on our way to find the line for the EXO viewing session. Honestly, it was just a lot of waiting, forming a new line, and standing in the hot sun. Thankfully, my sister brought an umbrella with her so we had a source of shade. We made some friends in line. The one thing that I will forever regret, as I still feel terrible for it today, is that we cut in line. One of our new friends went away from us and then we later saw her further up in the line. She motioned us over and I was very conflicted. Should I stay or should I go? I remember the other friend (who was much nicer than the other girl) telling me to hurry…so we hurried up and cut. I accidentally stumbled and made a scene of the whole thing. Anyway, I’m going to try to put that behind me as it ended up not really helping at all. When we were released into the viewing area, everyone was very tall and we couldn’t see anything. I remember making a very nice friend from Michigan and there was an obnoxiously rude girl in front of us who was yelling for Chen. It was all super exciting though because we were able to kind of see and hear EXO in person. My first impression of EXO was that they had amazingly milky skin. They were very nice, funny and handsome ^_^ 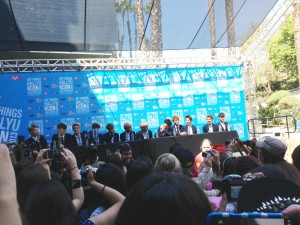 Afterwards, my sister and I decided to eat and watch people in the dancing booth. Let me tell you something. When you see a group of people with similar interests trying to learn something new together, it pulls on your heart strings. I was so in love with everyone who participated in trying to learn GD’s “Crayon.” There were people, old and young, learning the dance. The look on their faces when they accomplished it was inspiring. 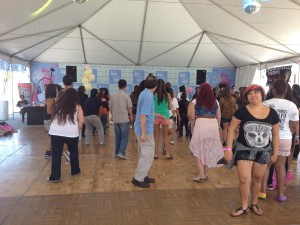 After proudly watching the dancing group finish GD’s dance, we went to another drink place and ordered a smoothie. This glorious smoothie triumphed over Fluff Ice beyond belief. It was so good. 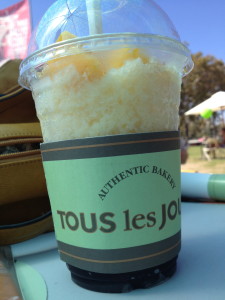 Since we had around 2 or 3 hours until the actual concert started, we moved to the stage and sat at an empty table. We used my sister’s umbrella as a source of shade. A bunch of guests came out, performed and did interviews. A few of my favorites were Henry, Danny from LA with his buddy Kevin, Shin B and the Alpha Girls (which included soojmooj and Tokimonsta).

On the 31st, my nephew had his 1st birthday party. It was jungle themed. My sister and I made cake pops for his birthday. Making the cake pops was a lot more difficult than I had planned. I had all of the right ingredients and tools. However, the culprit of its difficulty was the weather. Although my sister and I waited until 9 PM to make the cake pops so it would be cooler, it was still so hot that the cake pops would not function properly. Taking that all into account, I thought that the cake pops came out pretty well. Other than that, the party was fine.